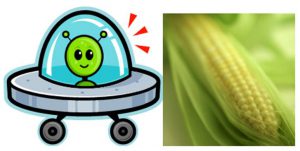 What is a GMO?  Genetic – is referring to the genes; the DNA; the blueprint of the organism.  Modified – changed in some way; typically a gene is either created or transferred from another organism and inserted into the DNA of the (formerly) natural organism.  Organism/Food – often used interchangeably but more correctly, the “Organism” might be a microorganism, animal, or plant, etc. and the “Food” is something you might eat.  All genetically modified plants are GMOs but not all GMOs are plants.  Make sense?

How & Why? I may go into the details of inserting DNA into the genome of other organisms in a later blog but to make it excessively simple…  A gene, or part of a gene, that produces a desired product or trait is inserted into the genetic makeup of a “host” organism and steps are taken (often including the crossing of fingers) to get the host organism’s DNA to “express” (turn on) the gene.  In GMF’s, the new gene may extend shelf life, or increase resistance to pests, or perhaps it even makes the plant sterile so that new seeds must be purchased every year.  The possibilities are endless.  Most of the time, the GMO’s that are created, are literally mutant freaks.  This is across the board – plant, animal, or microbe.  Nature usually wins and, at least in the case of genetically modified animals, they die during embryonic development or shortly after birth.  Occasionally, it “works”.

Not-So-Bad GMO’s – an example of a GMO that doesn’t get me riled up is the GM bacterium that has the gene for “Factor VIII”; a blood clotting factor deficient in hemophiliacs.  These bacteria are kept in isolation in a sterile environment where they pump out Factor VIII like you read about.  The factor VIII is harvested, purified and injected into hemophiliacs so they don’t bleed to death.  Great!

GMO’s that bug me are the ones that are A) not kept in a controlled environment and B) the ones in food.  These are usually one in the same.  The problem with not keeping them in a controlled environment is that this is nature we’re talking about here.  These foreign genes end up in the pollen of the GMO plants and get carried around the globe, literally, to mingle and cross breed with plants in nature.  If a mutation occurs in a biomanufacturing facility, they shut down production, kill the batch, sterilize everything and start over.  Crisis averted.  When a mutation occurs in nature, there’s not much that they can do about it.  Sadly, this is happening, watch “Food, Inc.” http://www.takepart.com/foodinc/

Gulp! In the US, 90% of the soy and 40% of the corn are genetically modified – and you’re eating it.  While GMO’s must be labeled in other countries, they’re not in the US and since it’s nearly impossible to buy a processed food without High Fructose Corn Syrup or Soy Lecithin, you are probably eating GMO’s.  Even if you don’t eat highly processed foods, your edamame or tofu is probably GMO.

Decide: If you want to eat them, it’s up to you.  I prefer not to for a couple of reasons: 1) I think it’s highly irresponsible to turn manufactured genes loose into the uncontrolled environment of nature; so I don’t want to support the companies that do that.  2) I’ll put my faith in Mother Nature and a few million years of evolution before I trust a couple of decades of research.

If you would like to sign a petition to encourage lawmakers to require the labeling of GMO’s see http://action.freshthemovie.com/p/dia/action/public/?action_KEY=2824