Proof that PEMF Pushes Past Placebo 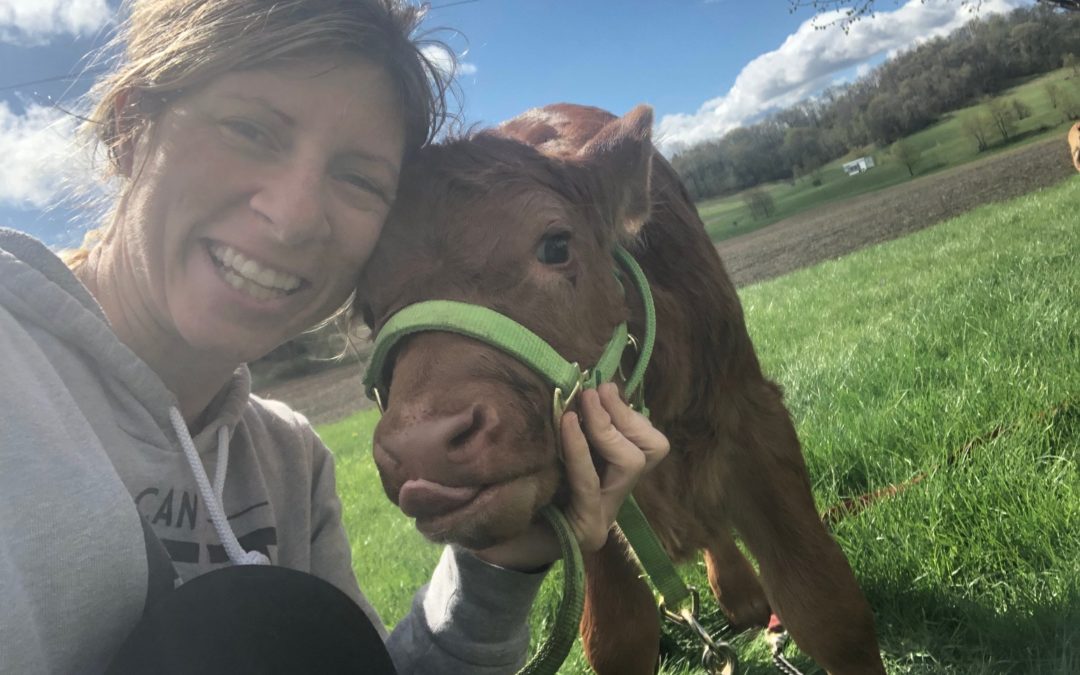 It was a Sunday morning. The house was quiet. I was sipping my coffee and scrolling through Facebook. I have over 3,000 Facebook friends from all over the world and obviously, I don’t actually know all of them. I recall seeing yet another post by a woman who had been trying to help nurse her sick calf back to health. I began to wonder where this woman lived so I clicked on her profile… West Salem, WI – about half an hour away. LIGHTBULB MOMENT! You see, I brought home my portable PEMF (Pulsed Electromagnetic Field Therapy) device from the office so that I could pulse my ponies that day. So here I am, on a Sunday morning, with my PEMF device in my car looking at a sick calf who hasn’t stood up in a week and he’s just half an hour away.  Maybe I could help? 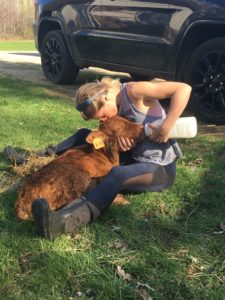 I sent a message to this woman I had never met and offered to drive to her farm and give the calf some PEMF therapy. She didn’t ask any questions. She was desperate to try anything and eagerly agreed. I told her I would be there around 10:30 a.m. I finished my coffee, told my husband of my crazy plans, typed her address into my GPS and headed out to see if I could help. I didn’t know if the little calf was going to make it, but I did know that it couldn’t hurt so I was going to try.

When I arrived and met Sarah, she brought me into her garage where little Bogart was laying on a pile of straw. I brought in my equipment and started his first session knowing that, if nothing else, I was helping Sarah to know that she did everything she could in case he didn’t make it. I did a whole body session with some extra attention on his brain and legs in hopes of providing his cells with enough energy to stand and to improve the communication between his brain and his legs after a week of being unable to stand. 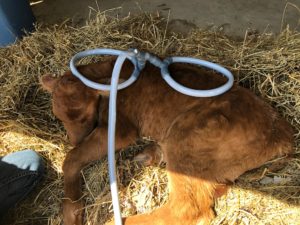 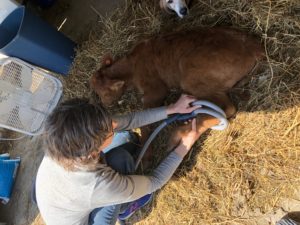 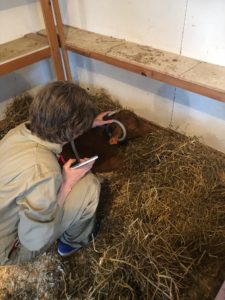 Bogart took a long nap after his PEMF session, but within a few hours, he was exhibiting signs that he was trying to stand.

Later that evening, Sarah went out to check on Bogart and found him STANDING in the garage! The next morning (Monday) he was walking! 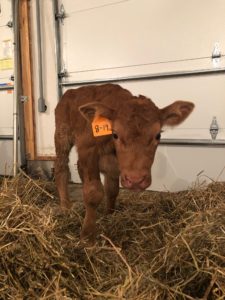 I wasn’t able to get back there on Monday, but I went back on Tuesday evening after work and gave him another session and the next day he was energized and trotting around in the barn. Shortly thereafter he got his “moo” back!

Here’s what Sarah has to say: “Bogart and I owe a huge thank you to Patti Bartsch. Without her and her PEMF unit, Bogart may not be here today. Two weeks after being born Bogart fell ill. He was unable to stand for seven full days and I was beginning to think he would never stand again. He was weak and had lost a lot of muscle tone. I had posted on Facebook and Patti happened to see it. She recommended a PEMF treatment. I was familiar with the machine and desperate for help. Patti did a full body PEMF treatment on Bogart that day and literally 12 hours later I found Bogart standing in the barn. PEMF treatment was what helped Bogart get back on his feet. Bogart’s legs and joints were weak but with time they grew stronger. By the second day, he was walking! Patti came out and did one more PEMF treatment on Bogart and later that day I literally had my calf back. His joints were getting stronger and he was getting stronger. Today, I have a healthy Red Angus calf that runs around in the field like a regular calf would. I don’t think this would be the case if it wasn’t for PEMF.” -Sarah Allen 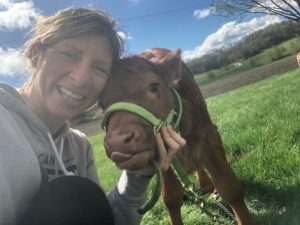 PEMF provides an energy source for cells to recharge and function properly. The therapy supports cellular oxygenation, hydration, detoxification, and nutrient uptake. Clients consistently report results including less pain, better sleep, more energy, clearer thinking, improved mood, enhanced athletic performance, and shortened recovery from workouts or injuries. You have no idea how much PEMF can help – until you try it!

Please note that we are not currently offering PEMF for animals through our office. We will let you know if that changes.