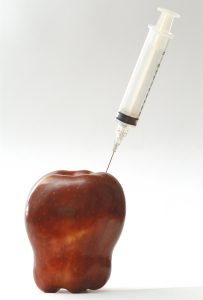 As a follow-up to my Healthy is a Big Fat Lie article, I wanted to give you some specifics about a random product that people tend to think it healthy and I don’t consider it to be food at all.  Nutri-Grain bars sound like they are good for you, right?  After all they have “Nutri” so they must be nutritious and “Grain” which everyone knows is good for you, right?  It’s marketing genius!  Let’s take a closer look at some of the ingredients that are on my “avoid” list.

1.) Enriched Flour – Started as a natural product; ground up grains.  But since grinding grains releases the enzymes that break down the nutrients, the flour is chemically treated to remove the enzymes and a bunch of naturally occurring nutrients to prolong the shelf life.  The enrichment happens when vitamins manufactured in a laboratory, not from nature, are added back.  Look for “Whole Grain Flour” instead.

2.) High Fructose Corn Syrup – Mmmmm liquid calories chemically extracted from genetically modified corn.  Skip it.  Just so you know, some “Natural” foods also have HFCS so be sure to read the labels and skip everything with HFCS.  Go for honey or raw sugar instead.

3.) Propylene Glycol – That’s right… Antifreeze.   This is in a ton of products.  It was in the salad dressing in the cafeteria at the school I used to teach at.  Do I even need to talk about why I don’t eat this?  I didn’t think so. 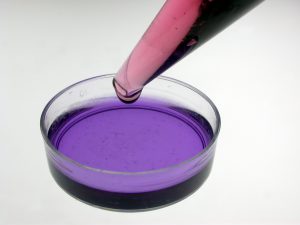 If it’s not a nutrient, it’s not food.

4.) Soy Lecithin – I tend to avoid products containing soy.  I know, I know – A vegetarian who doesn’t eat tofu?  That’s right.  I subscribe to the theory that the abundance of (genetically modified) soy in processed foods is unhealthy.  Soy contains phytoestrogens or plant estrogens that mimic human estrogen in the body.  I believe that this is contributing to both the rising level of breast cancer as well as the disturbing rates of precocious puberty where 8-year-old girls are already menstruating.

5.) Artificial Flavor – A chemical manufactured to taste like something from nature.  I’ll stick with nature, thanks.  My body knows what to do with things from nature, not from a lab.

6.) More High Fructose Corn Syrup – Yes, not only is it in the filling but it is in the crust too.  See point 2 above.

7.) Sodium Citrate – This is a chemical emulsifier to make a smoother texture.  It is known to alter urinary excretion of some drugs and other chemicals.  It’s not a nutrient so therefore, it’s not food. 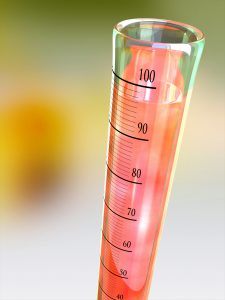 Are carcinogens on the menu tonight?

9.) Soybean Oil with TBHQ – See point 4 regarding soy but let’s talk about TBHQ.  Tertiary Butylhydroquinone: A preservative used to keep the oil from going rancid.  It contains butane, and can cause death at a dose as low as 5 grams.  Just one gram causes some serious adverse reactions including nausea, vomiting, delirium, a sense of suffocation, and collapse (from “A Consumer’s Dictionary of Food Additives” by Ruth Winter, M.S.).  You can preserve fats naturally by adding vitamin E, a potent antioxidant – but TBHQ is cheaper.

10.) Modified Corn Starch – Emphasis on “Modified”.  First take a plant that occurs in nature, then genetically modify that (over 90% of the corn grown in the US has been genetically modified), then take the naturally occurring starch from the corn and modify that too.  That’s modified modified corn starch.  I think nature has a good thing going.  I don’t think it needs any modifying from us.  Chemicals are used to change the structure of the starch.  Again, I think I’ll stick with the natural product or at least one that hasn’t been modified twice.  Look for organic, non-GMO, or heirloom varieties of corn.

So, that’s one product that tons of health-conscious people eat regularly because, after all, it’s “Nutri”tious and it has “Grain” so it must be good for you.  Read labels on every single thing that you buy if you intend to put it on or in your body.  Do yourself a favor and go through your cupboards and purge anything that has been modified or contains artificial colors, flavors, or preservatives.  And keep an eye out for soy.  It’s crazy where that stuff shows up.